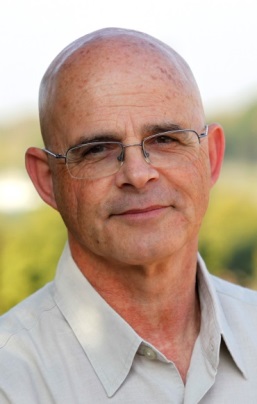 Materials with reduced size and dimensionality such as thin fibers and films, nanotubes and nanowires, or metallic clusters often exhibit exceptionally high mechanical properties compared to those of corresponding macroscopic specimens. Epoxy is an archetypal brittle amorphous isotropic polymer, which means that when stressed under a tensile force, its deformation is linear and elastic up to failure. However, thin epoxy fibers prepared in our laboratory (with a diameter in the 20-150 μm range) exhibit a striking plastic (non-elastic) behavior1. This plastic deformation is accompanied by necking, a sudden prominent decrease in local cross-sectional area, a phenomenon which is almost never-observed in highly cross-linked glassy polymers. Enormous increases in all mechanical properties (Young’s modulus, strength, strain, toughness) are observed in the fibers and the necked fiber segments, compared with bulk epoxy specimens. This is especially true at the smallest fiber diameters. Size effects for the strength of epoxy can be elucidated either by means of a classical fracture mechanics argument (strength ~ d-1/2), or via a stochastic model argument (strength ~ d-1/β, where β is a function of the material and is generally larger than 2). In both models the presence and size of critical defects plays a key role. However, defects cannot explain the colossal ductility (plastic deformation) seen in our experiments, nor can the presence of defects justify a size effect in an elastic property, namely Young’s modulus. Scarce evidence exists in the literature for similar (milder) size effects in epoxy fibers but without any structural justification. We find here that highly cross-linked necked epoxy fibers exhibit macromolecular anisotropy which likely explains the observed high mechanical characteristics. Could the ductility, necking behavior, and size effect in highly cross-linked epoxy fibers be attributed to macromolecular re-alignment? This is a highly counterintuitive conjecture because unlike semi-crystalline polymers, or even lightly cross-linked polymers, epoxy is an amorphous polymer which forms 3D rigid interconnects when cured, thus a macromolecular network with very little propensity to flow. Despite this apparent conceptual obstacle, first evidence of molecular (re)orientation in an epoxy fiber was obtained by Wide Angle X-ray Scattering (WAXS). If molecular (re)orientation is indeed confirmed, an explanation/mechanism will have to be proposed for such unexpected observation. This might involve reordering of polymer segments, distortion of crosslinks, or other molecular-scale structural changes, which would favor mechanisms leading to high strength, stiffness and plasticity.

BIO: Born in Israel, Prof. Wagner grew up in Belgium, where he earned a License in Physics from the Free University of Brussels (1975). He was awarded MSc (1977) and PhD (1983) degrees in Materials Science from the Hebrew University of Jerusalem (Israel). He spent three years at Cornell University (Ithaca, New York) as a postdoctoral associate and lecturer, before joining the Weizmann Institute’s Department of Materials Research (now the Department of Materials and Interfaces) in 1986.

The author of over 290 papers (24,500 citations, h-index: 73, source: Google Scholar) and several chapters in books, his scientific interests include the micromechanics of advanced composites and their interfaces, novel man-made materials such as carbon nanotubes and nanocomposites, scaling and hierarchical effects in materials, and the mechanics of natural and nature-inspired structures. He permanently holds the Livio Norzi Professorship in Materials Science at the Weizmann Institute.

Wagner was a Guest Professor at the Technical University Hamburg-Harburg (Mercator Professorship, 2010 and 2011), the Ecole Centrale Paris (2010), the Centre de Recherches Paul Pascal (CRPP) and CNRS Pessac, Bordeaux (September 2009), ExxonMobil Research and Engineering, Annandale, New Jersey (2007), and at the Max-Planck Institute of Colloids and Interfaces, Golm-Potsdam (2005).

In 2000 Prof. Wagner was the elected Chairman of the Gordon Research Conference on Composites in Ventura, California, and in 2013 he was invited to present the Harvard-MIT Joint Nanomaterials Special Lecture at the Massachusetts Institute of Technology. Recently he was the Chairman of the COMPO2014 Nanocomposites and Biocomposites conference at the Weizmann Institute.

Prof. Wagner has been awarded a number of prestigious awards. The most recent ones include the 2019 Israel Vacuum Society Research Excellence Award, the 2017 ASC/DEStech Award in Composite Materials, Purdue University (USA), the 2016 Medal of Excellence in Composite Materials (USA), the 2014 Landau Prize (Israel), and the 2014 Plantin Award (Belgium).