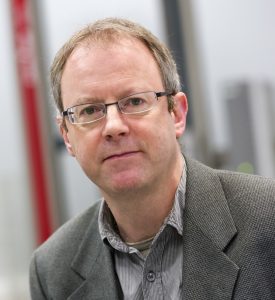 BIO: Fionn Dunne is Chair in Micromechanics and holds the Royal Academy of Engineering/Rolls-Royce Research Chair at Imperial. His research is in the fundamentals of deformation and failure particularly relating to hcp polycrystal and Ni alloys and includes experiment, characterisation, computational crystal plasticity and discrete dislocation plasticity. Applications include micro-deformation, fatigue crack nucleation, microstructure-sensitive crack growth, and polycrystal sonics for NDE.

He has published over 180 research papers and is co-author of Introduction to Computational Plasticity, OUP, 2005. He is a consultant to Rolls-Royce, a member of their Core Materials Working Group, a member of the MOD’s Research Programmes Group  and was a Royal Society Industry Fellow with Rolls-Royce. He led the EPSRC programme grant Heterogeneous Mechanics in Hexagonal Alloys across Length and Time Scales, directed the Imperial Rolls-Royce Nuclear University Technology Centre, and currently Co-Directs the BIAM Centre for Materials. He is Honorary Professor with the Beijing Institute of Aerospace Materials, and is Emeritus Fellow of Hertford College Oxford. He was elected a Fellow of the Royal Academy of Engineering in 2010, was awarded the IoM3 Harvey Flower Prize (2016), and shared the 2017 Imperial President’s Award for Outstanding Research Team.