Recent advances in microprojectile impact tests have opened a new route to explore the behaviors of nanomaterials under extreme dynamic conditions. For example, impact tests have revealed that the specific penetration energies of ultrathin polymer films are remarkably high compared to the energies of conventional protective materials. The current experimental techniques are, however, unable to elucidate some of the complex atomistic mechanisms associated with the penetration process, which can only be realized through atomistic simulations. We conducted comprehensive density functional theory (DFT) and molecular dynamics (MD) simulations to investigate the behavior of nanoscopic polymer/ceramic multilayers under shock loading. We first conducted DFT-based quantum MD simulations to compute the shock Hugoniot of polymers (i.e. polyurea and polyurethane) and compared them with the available experimental data. Subsequent comparisons of the DFT-based MD simulation results with the corresponding classical MD simulations revealed the upper limits of the shock speed that can be accurately modeled using non-reactive force fields. Thereafter, we employed classical MD to explicitly model the dynamic shock wave propagation and spallation of polymers, as well as polymer/silicon-carbide multilayers. Finally, we conducted large-scale MD simulations of ballistic impact tests on the multilayers to investigate the atomistic mechanisms associated with the penetration process. Our study provides significant insight into the nanoscale mechanisms associated with the dynamic behavior of materials under extreme conditions. 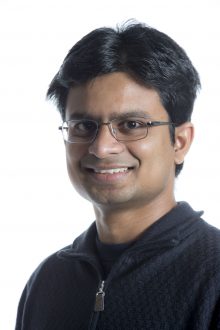