Blast Induced Traumatic Brain Injury (bTBI) is a serious concern to the population in the military. Axonal injury occurring due to these blasts is one potential injury mechanism currently being investigated. We are currently developing a finite element study that looks at axonal strain rates under blast loads. A previous study that uses finite element modelling concluded that blast induced skull flexures can result in dangerously high strain rates in the axonal fiber bundles. However, in this study blast loads were applied directly to the head without any helmet. Considering that soldiers are equipped with headgear, a new study is being conducted in order to establish whether the presence of the helmet affects the strain rates experienced by the axonal bundles. This study implements the embedded element modelling technique to model the axons in the brain. The model comprises of the brain, axonal bundles, CSF, skull, skin, jaw, teeth, part of the spine and shoulder regions; it includes a helmet, helmet pads and straps as protective gear. Preliminary results show that the inclusion of a helmet reduces the strain rate experienced by the axonal bundles. The full study will include blast loading conditions in multiple different directions at different distances from the head for two types of models; one including the gear and one excluding it. First the simulation results from the model with no protective gear will be compared with experimental data which involved simulating shock waves on cadaver human heads. After establishing an agreement between the experimental data and the no helmet head model, the same boundary conditions will be used for the model with the helmet. Finally, a conclusion will be made as to whether the helmet has any effect on the strain rates experienced by the axonal bundles. 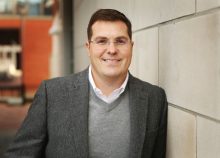