Within some industrial applications, confined rubbers are subjected to high hydrostatic pressure. It has been known for several decades that rubbers exhibit a pressure-temperature superposition, interpreted by the free-volume theory. However, our experimental results, on a highly filled rubber, demonstrate a pressure-temperature superposition which is about two orders of magnitude larger than the one observed in pure rubbers.

Filled rubbers mechanics is governed by the presence of a so-called filler particles network, a network of solid aggregates linked by bridges of highly confined polymer. It is well known that the polymer confined between neighboring aggregates have a glassy-like behavior. Therefore, these confined polymer regions have been called glassy bridges. Thus, assuming that for highly filled rubbers, the filler particles network sustains most of the stress, the question about the pressure effect on the glassy bridges arises.

Experimentally, we observe that our filled rubber exhibit the same mechanical behavior under different sets of specified temperature and pressure, even in the non-linear response regime (Payne effect). Using the height/glass transition temperature dependence of the glassy bridges, we propose a relation for the pressure-temperature superposition.

The predicted shear storage modulus is found to be in a good agreement with our experimental results, confirming the relevance of our multi-scale approach.

Filed Under: Atomic to Continuum Scale Composite Mechanisms: Experiments and Modeling Investigating Multiscale Mechanical and Damage Response of Composites and Their Constituents 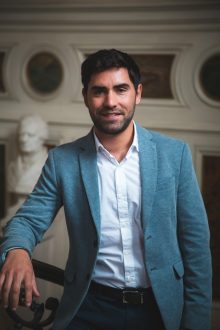