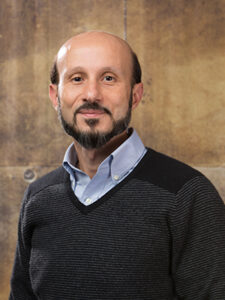 BIO: Amine Benzerga is currently the General Dynamics Professor of Aerospace Engineering at Texas A&M University, which he joined in 2004. He holds the Diploma of Ingenieur in Aerospace Engineering from SUP’AERO (Toulouse, class of 1995), a M.S. in Mechanical Engineering from Paul Sabatier University in the same year and a Ph.D. in Materials Science and Engineering from Ecole des Mines de Paris in 2000. Prior to his joining Texas A&M, he was a Research Engineer at the National Research Laboratory of Gaz de France (now NG, Paris, France) on leave at Brown University (Providence, USA) where he later pursued his post-doctoral studies in Solid Mechanics. His research interests include the deformation and fracture of structural and functional materials. Dr. Benzerga was the recipient of a CAREER award from NSF in 2008 and the Edward Pete Aldridge Associate Professor of Aerospace Engineering (2011-2014). He is currently the Director of the Center for intelligent Multifunctional Materials and Structures (CiMMS) and holds a joint appointment in the Department of Materials Science and Engineering.